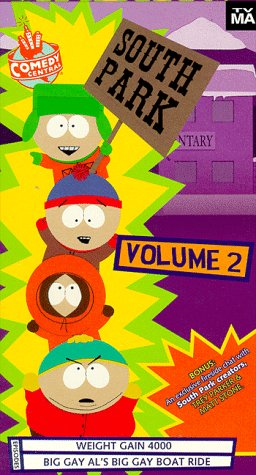 This, volume 2 of three, contains two episodes from the first season of South Park, Comedy Central's wildly successful animated sitcom. In addition, viewers get two very tongue-in-cheek fireside chats with cocreators Trey Parker and Matt Stone. The controversial cartoon gained a devoted cult following for its wonderfully unabashed assaults on dull sitcom formula and politically correctness. While the show's animation is beyond primitive, with goofy construction-paper cutouts acting as characters, its writing is hilariously shocking and pushes the envelope of good taste off the table. Episodes explore the small mountain town of South Park through the point of view of four foul-mouthed yet lovable eight-year-olds. They include level-headed co-leaders Stan and Kyle; the fat, terminally pissed-off, and hysterical Eric Cartman; and the hooded, incoherent Kenny (who dies in every episode). As such, it's stuffed with toilet humor, graphic violence, and profanity, but South Park also cleverly subverts TV clichés, and acts as a scorching satire of America's hypocritical attitudes toward social problems like racism, homophobia, jingoism, neglectful parenting. The finest example is "Big Gay Al's Big Gay Boat Ride." When Stan's dog, Sparky, begins showing signs of homosexuality, the boys can't cope and try to change his nature until he finally runs away to a gay pet sanctuary. Meanwhile, Parker and Stone underscore the social ignorance by mirroring this with a huge, macho football game that demands all of the town's interest. Rarely has gay commentary been this pointed or clever on television. "Weight Gain 4000," while humorous, is the weakest of the early episodes and displays the show's unfortunately repeated fixation with celebrities and popular culture. As the town prepares for the arrival of Kathy Lee Gifford, one of her bitter former classmates prepares to settle an old score, Taxi Driver-style. --Dave McCoy
Show More
Reviews

Disclaimer: The price shown above includes all applicable taxes and fees. The information provided above is for reference purposes only. Products may go out of stock and delivery estimates may change at any time. Desertcart does not validate any claims made in the product descriptions above. For additional information, please contact the manufacturer or desertcart customer service. While desertcart makes reasonable efforts to only show products available in your country, some items may be cancelled if they are prohibited for import in Ukraine. For more details, please visit our Support Page.